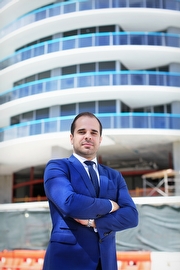 Strong leadership and an ability to maximize results are hallmarks of Nicolas Barbara’s real estate approach.

As one of Cervera’s most consistent Top Producing agents on project after project, Nicolas has proven that

not only in South Florida, but also in the international markets Nicolas often serves.

Within the Development Sales Industry, Nicolas’ achievements have been impressive. He has sold more than

$100 million in pre-construction sales, and was promoted to the Sales Director position at both Aria on the

Bay – a $500 million luxury waterfront development in the heart of downtown Miami, and also at Bay House.

At both projects, he was also a Top Producer among the agents he led and oversaw, and he helped

and his skill with projecting market trends. His approach is to personally oversee all agents’ production and

provide sales teams with the tools they need to generate superior results. To that end, Nicolas analyzes and

approves marketing campaigns, tracks their effectiveness, oversees and negotiates all transactions, and

analyzes and reports on sales trends for each of the sales teams he leads.

Add to that more than a decade of real estate experience that spans both Miami and New York, plus his

extensive knowledge of international markets, it’s clear to see why Nicolas has built a reputation for

completing tasks with speed and excellence.

“I always like to quote Benjamin Franklin, who said, ‘If you want something done – ask a busy person.’ I

take great pride in trying to be that kind of professional,” says Nicolas. Indeed, it is his tireless energy and

motivation that clients and other real estate professionals admire most, and definitely what sets him apart

from the rest of the industry.

Originally from Buenos Aires, Argentina, Nicolas has also lived in New York, where he continues to be a

licensed real estate sales agent. He has lived in Miami since 2012 and travels extensively internationally,

with a strong focus on Latin America. He has also traveled as far as Turkey and Qatar in the pursuit of

achieving his real estate goals and servicing clients. Whether for business or pleasure, every destination he

visits only further refines the ease with which he relates to people from all over the world. Many of his

asset in achieving their goals.

completed more than 100 hours of advanced real estate education and training, including Property

Management and Investing. As well, he makes a policy of donating 5% of his real estate earnings to a Latin

He is fluent in English and Spanish and has a conversational knowledge of Italian & Portuguese.