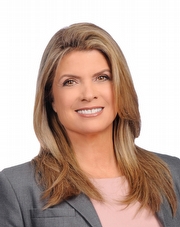 Dora Puig began her high-end real estate career in 1989 in single-family luxury homes in Beverly Hills before returning to South Florida where she is currently responsible for over $4 Billion in residential and condominium sales. Puig has been recognized by her peers as one of the most successful sales professionals in Miami-Dade County, setting and exceeding numerous residential sales records and serving as the top producing broker at several developments.

Puig has been recognized as the No.1 Realtor in Miami-Dade for 5 consecutive years by Real Trends “THE THOUSAND” Published by The Wall Street Journal.

The South Florida Business Journal has also proclaimed her one of 2018’s “25 Most Influential Businesswomen”. Puig currently owns and operates the high-end boutique real estate firm “Luxe Living Realty” with 2 prime locations in South Beach. The flagship property lounge is located in the renowned Lincoln Road district with an additional location in the ultra-luxurious South of Fifth Street neighborhood.

Dora holds the highest sale of 2019 for Fisher Island’s newest development Palazzo Della Luna with a $23 million sale of Penthouse 1. In 2019, Dora also sold. She also holds the record for the highest total sale price of a unit on Fisher Island with the $35 million sale of Penthouse 2 at Palazzo Del Sol in February, 2015. In addition to leading her general real estate boutique brokerage, Puig currently serves as the Director of Sales and Marketing for the $1 Billion sellout of the 2-phased development Palazzo Del Sol and the newly launched Palazzo Della Luna, Fisher Island. There, Puig leads a team of six talented multi-lingual in-house sales executives in selling 50 exclusive residences ranging from 3,800 to 10,100 square feet with pricing from $6.5 to $40 million.

Puig has also served as Director of Sales and Marketing for other prestigious condominium projects including Bristol Tower, Santa Maria, The Residences at the Bath Club, The Astor Home Condo-Hotel project in South Beach and Riva Bay Harbor.

Puig started out in 1989 as a real estate associate for two of Beverly Hills’ biggest and best real estate luxury brokerage houses. She first worked at Fred Sand’s Estates in the Elite Director’s Office, and subsequently at Jon Douglas Realtors in its Estates Division, specializing in the high-end luxury single-family home market. In addition, she acted as a consultant to several single-family home developers who bought properties to renovate, reposition and resell. In 1995, Miami-developer, Ugo Colombo, brought Dora to Miami, Florida to close out the last $15 million in sales and run the re-sale division of his 40-story, luxury Bristol Tower condominium project.

After Bristol Tower was sold out, Dora continued working for Mr. Colombo and his company, CMC Management Group, as Director of Sales & Marketing for the highly successful, 54-story ultra-luxury Santa Maria condominium development. In addition to managing the in-house sales team and office, Dora oversaw all aspects of Santa Maria, from conceptual design to marketing, public relations and advertising. There, she sold and closed over $150 million of the Santa Maria’s developer sales.

In 1999, Dora also performed real estate marketing consulting services for LaSalle International Group, a Chicago-based real estate development firm. She advised them on all development aspects, including design, construction, marketing and public relations matters for their twin 50-story tower, LaSalle Apart Hotel & Spa, which was to be located in the heart of Miami’s Brickell Village. A project ahead of its time, LaSalle Apart Hotel & Spa, was instead shelved when the land was sold by the developer for twice its value.

In 2001, Dora became the Director of Sales and Marketing for the super luxury oceanfront condominium development The Residences at The Bath Club. She successfully sold out the project with $243 million in sales for the developer and its equity partners CSFB by the end of 2005. Besides building and managing the in-house sales team, she also managed a marketing and media budget of over $5 million. In 2006, Dora launched her own boutique Brokerage firm, PuigWerner Real Estate Services, LLC specializing in high-end single-family & luxury condominium sales. She coupled her talents as the company's top producer with consulting services for leading developers in projects such as the AstorHome Condo-Hotel development in South Beach.

In 2013, Dora was brought in by Fort Capital Management to serve as Director of Sales and Marketing for Riva Bay Harbor, a boutique, contemporary, 25-unit condominium building featuring large 3- and 4-bedroom floorplans, located on Biscayne Bay in Bay Harbor Islands. After putting together an exceptional Luxe Living Realty sales team, Dora officially launched the Riva sales effort in May 2013. She and her Team became the market-makers of Bay Harbor Islands Luxury Condominium market by doubling the closed sales Price per Square Foot for the area’s condominium market. They completed a record $40 million sellout by February 2015. This included posting the highest recorded condo sale to date in Bay Harbor Islands for $3.4 million ($1,000 PSF).

Dora earned a Bachelor of Business Administration in International Finance and Marketing from the University of Miami and an MBA in International Business from George Washington University in Washington, D.C. Fluent in English, Spanish and Italian, Dora is an active member of the Master Broker Forum. Dora is also founding member of the Women of Tomorrow Mentoring Organization.